My Little Corner Of The Universe 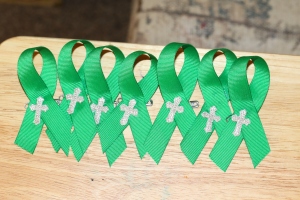 October 27, 2010 was a dark day for those in my husband’s chosen profession of collegiate football videography. That afternoon, Declan Sullivan, a 20 year old student employee for the University of Notre Dame football team was filming a practice from a fully extended hydraulic scissor lift in questionable weather when a 50+ m.p.h. wind gust toppled the lift. It crashed through a fence and onto a street adjacent to the field; Declan died from his injuries shortly thereafter. When my husband texted me about the accident, I went online to learn more about it and felt physically sick when I saw pictures of the mangled scissor lift. I knew that a) this tragedy was completely avoidable and b) I thought about all the times Bill has been in scissor lifts — it could have been him many times in his career. It both tore my heart out for Declan’s family, and infuriated me that such negligence could have taken this young man’s life. There were many conflicting reports about what happened that day, about whether the staff kept a sufficient eye on the weather when there had been tornado warnings the previous day, about why they didn’t practice indoors and if Declan felt compelled to film despite tweeting several times that the conditions were “terrifying.” One of his last tweets before he took the field — “I guess I’ve lived long enough” broke the hearts of the football videography community and sickened us all.

I have witnessed a scissor lift collapse and I can tell you it was one of the worst things I’ve ever seen. I was a junior in the marching band at James Madison University in 1996 when two students were seriously injured after a tarp they’d attached to the lift (to keep warm if I remember correctly) caught the wind and blew it over backwards. They suffered back and whiplash injuries, but fortunately their lift was only about halfway up, or the accident might have had the same result as Declan’s did. If that had happened one year earlier, that would have been Bill on the lift during his senior year in college. I still get cold chills when I think about that.

Bill has been a football videographer for over 20 years and has supervised students employees for 18 – I can’t begin to count the number of times I’ve heard him tell them “don’t be a hero”. He has always left the ultimate decision of going up in the lift to the students themselves and has their back if they have to come down and film practice from a lower vantage point. He would refuse to let them put themselves in danger for the sake of a certain shot, and he’s taken on coaches before when their video demands are unreasonable. I know his guys trust him and feel comfortable doing their jobs, or as comfortable as you can be in a 50 foot tall lift dodging field goals on a Saturday afternoon.

I can’t speak to what exactly happened at Notre Dame, though I have rather strong opinions about it. The official reports never assigned blame to any one person, but sometimes putting the desire to win above all else has dangerous consequences. Declan was a young man who was working for a football team he had idolized his entire life — he was a student employee and was not in the position where he could tell Brian Kelly or any other staff member that he wasn’t going to do the job.  The weather was bad and it was up to them as his employers to keep him safe; their collective breach of the duty of care cost him his life. Since then, Notre Dame has banned the use of hydraulic lifts and instead uses remote control cameras on poles.  Other schools have written safety protocols in place and put greater emphasis on training and weather monitoring. If the collegiate football videography family has learned anything in the five years since this tragic accident, it’s to always emphasize that no shot is worth someone’s life. Perhaps Declan Sullivan’s greatest legacy lives in these changes that will make the job safer for all involved in football videography. All I know is that his passing left an indelible mark on those in this profession. Five years on, we’re still adapting and finding new ways to protect our student employees. Rest in peace, Declan, you will never be forgotten.